“I’ve had three kids. After each child I had a different experience. One kid I had kind of mild postpartum, and one kid I had severe postpartum where I had to take pretty heavy medication because I just wasn’t thinking straight at all,”

“And then I had one kid where I had no postpartum at all,” she added.

Supermodel and Victoria’s Secret Angel Behati Prinsloo has opened up about her experience dealing with postpartum following the birth of her and singer Adam Levine’s first child, Dusty Rose.

“I had moments of postpartum after our first baby that I felt like it was coming through. But my husband was so incredibly supportive and always got me out of it.”

“I think it’s very normal, though, as a young mom and a new mom to feel helpless and to feel overly emotional, you know … I think I got lucky not to have it to an extreme case, but you can see yourself spiraling,” she added.

The mother of two went on to encourage anyone suffering from postpartum, even if their symptoms seem minor, to ask for help and seek support.

After giving birth to her first daughter, Rowan, in 2003, the model and actress said she experienced PPD.

She detailed her postpartum experience and subsequent treatment using antidepressants and therapy in her book, “Down Came the Rain: My Journey Through Postpartum Depression.”

“I had no desire to even pretend to care about her. And it absolutely terrified me,” she said, adding that she doesn’t want new moms suffering from PPD to feel stigmatized.

“If I had been diagnosed with any other disease, I would have run to get help,” she told People magazine. “I would have worn it like a badge. I didn’t at first – but finally, I did fight. I survived.”

Drew Barrymore, who said she didn’t experience PPD after giving birth to her first daughter Olive, said she was surprised when she felt “under the cloud” after the birth of her second daughter, Frankie, in 2014.

It taught her to stay present in the moment.

Actress Bryce Dallas Howard detailed her battle with PPD after giving birth to her son, Theo, in 2010.

“It is strange for me to recall what I was like at that time,” she wrote. “I seemed to be suffering emotional amnesia. I couldn’t genuinely cry, or laugh, or be moved by anything. For the sake of those around me, including my son, I pretended, but when I began showering again in the second week, I let loose in the privacy of the bathroom, water flowing over me as I heaved uncontrollable sobs.”

The “Jurassic World” star credits a homeopathic treatment plan suggested by her midwife, as well as her doctor, her friends, and Brooke Shields’ memoir for helping her overcome her PPD.

After giving birth to her son, Angelo, in 2012, Adele said she was reluctant to talk to anyone about her symptoms of PPD.

In an interview with Vanity Fair, she explained that it wasn’t until she started talking to friends who were also going through it that she started to feel better.

Describing it as a delayed case of postpartum depression. The “Friends” alum explained that she went through a really hard time when her daughter, Coco, turned 6 months old.

“I couldn’t sleep,” she said. “My heart was racing. And I got really depressed. I went to the doctor and found out my hormones had been pummeled.”

People reported that Cox’s doctors prescribed the hormone progesterone and that she turned to her friends Jennifer Aniston and Brooke Shields for support.

The television co-host thought she had a bad case of the baby blues following the birth of her daughter, Ava, in 2011.

It wasn’t until speaking to her husband that she realized it could be PPD.

“I thought women with postpartum depression wanted to hurt their babies. But for me, it had nothing to do with Ava,” she said. “I had this big emptiness that you shouldn’t have right after you have a baby. I was like, I don’t want to seem like I’m not happy — it’s just that there’s something chemically wrong. I would get frustrated and angry really easily.”

Paltrow revealed that in 2006, just days after her son Moses was born, she started to experience symptoms of postpartum depression.

The actress said she helped to treat her postpartum depression with therapy and exercise.

Rapper Cardi B, who gave birth to her first child in 2018, opened up,

“I thought I was going to avoid [postpartum depression],” she told the publication. “When I gave birth, the doctor told me about postpartum, and I was like, ‘Well, I’m doing good right now, I don’t think that’s going to happen.’ But out of nowhere, the world was heavy on my shoulders.”

She said she began feeling better a few months after her daughter was born.

‘I didn’t understand why I wasn’t like all the other mums, in love with my new baby. While everyone else was bonding with their child, I wanted to walk out the door and never come back. I felt so ashamed. I felt so bad that I didn’t want to wake up in the mornings. I wanted to roll over and die. It’s such a deep low.’

‘I was so emotional and erratic, and I remember saying: ‘Mum, I wish I was dead.’ I get quite emotional thinking back to that time. I remember I had that sick feeling in my stomach and my mum said: ‘Right, that’s not normal saying stuff like that,’ so she rushed me to the doctor. When they told me I had postnatal depression, it was the biggest relief to know I wasn’t going insane.’

‘My doctor put me on medication and after about four weeks it was as if a switch had been flicked and I was coming back to myself. Of course, I couldn’t come off the medication straight away just because I was feeling better, I had to do it properly. But I realised I had kept quiet for far too long.’

‘It was like an awful knot in my stomach and I felt overwhelmed and even that people wanted to take my baby away from me. I got help and managed to get through it. I don’t feel ashamed about talking about it and neither should anyone else.’

‘[On checking into an institute for her PND] I took the steps I needed to take in order to recover. The truth was, I just did what I needed to do and addressed a lot of issues that needed addressing.’

‘I’d never even heard of postnatal depression. After being diagnosed by my GP, I was scared to talk to anyone or get any help. I want people to speak up about it and be honest about it but even I’m nervous.’

‘If you only look at adverts on TV, we’re programmed to think that this is the most special time in you life and you’re going to have this instant bond and this instant connection. And for some mums it just doesn’t happen, and then they feel that they’re a failure.’

Sheridan Smith spoke openly about how her worries about mental health and anxiety during her pregnancy with her baby son, Billy, shaped her new documentary about becoming a mum. “It was secretly one of my worries too, so the documentary took a turn then and we decided to go and see what was out there, to help women in that position.”

“I think when you’ve had mental health issues in the past you worry that it’s going to appear again suddenly in pregnancy,” Sheridan added, reflecting on her own mental health journey.

“I didn’t know what was out there and you always feel quite ashamed to say it, especially when you’re pregnant, I think, when you’re going to be a mum. You feel like a bad mum. How can you be having these thoughts? And so we went on this journey and met the most amazing people.”

She admitted that she had briefly stopped taking her medication during pregnancy, for fear that it might harm her unborn child. However, when she turned to doctors for advice she learned that many medications were perfectly safe to take during pregnancy.

“There’s no guilt or shame to feel around that but it’s really necessary that you do get the help and support that you need,” she said. “Lots of this medication is perfectly safe to take while you’re pregnant but what you mustn’t do is take things into your own hands.”

In a new interview, the British singer has spoken becoming a mother and admitted that she struggled to form a bond with her baby straight away.

“I felt very geared up for parenthood and in my mind I was going to have lots of children,”

“I had a really good role model ⁠— because my mum was pretty amazing. And then I had my baby and lots of things went wrong.”

She continued: “I was sadder than I’ve ever been before and I felt broken, largely by the disappointment that I wasn’t the mother that I thought I’d be.

The Voice Kids UK star went on to explain that she became so distressed she questioned whether she had given birth to another couple’s baby and feared a mistake at the IVF clinic.

“I was like, that’s not my baby, that’s totally not what I thought my baby would be like,” she said.

We are changing the New Mums virtual group from Tues to THURSDAY 11am. [email protected] for more information

After feedback and some discussion, we have decided to have our own Swaps & Sales.

Swaps can include advice and support of course as well as pregnancy goods and good for baby up to two. Sales for used items too. We will hold this all on the forum as we can keep it all anonymous and review this as and if we need to. Comments and feedback, as always, welcome to [email protected] Thank you.

We are delighted that the pregnancy & new babies support group currently on Fridays at 1pm is so popular we have launched another one ! Friday mornings from 11 am. As always if you would like to join, please let us know by emailing [email protected] or let your peer support worker know.

Please use this link to complete a short survey on our services and delivery. We really do need your voices and feedback. Thank you so much.

Here are some results from the last survey, as you can see your feedback is valuable to us – it enables us to make positive changes to the way in which we provide you with support. 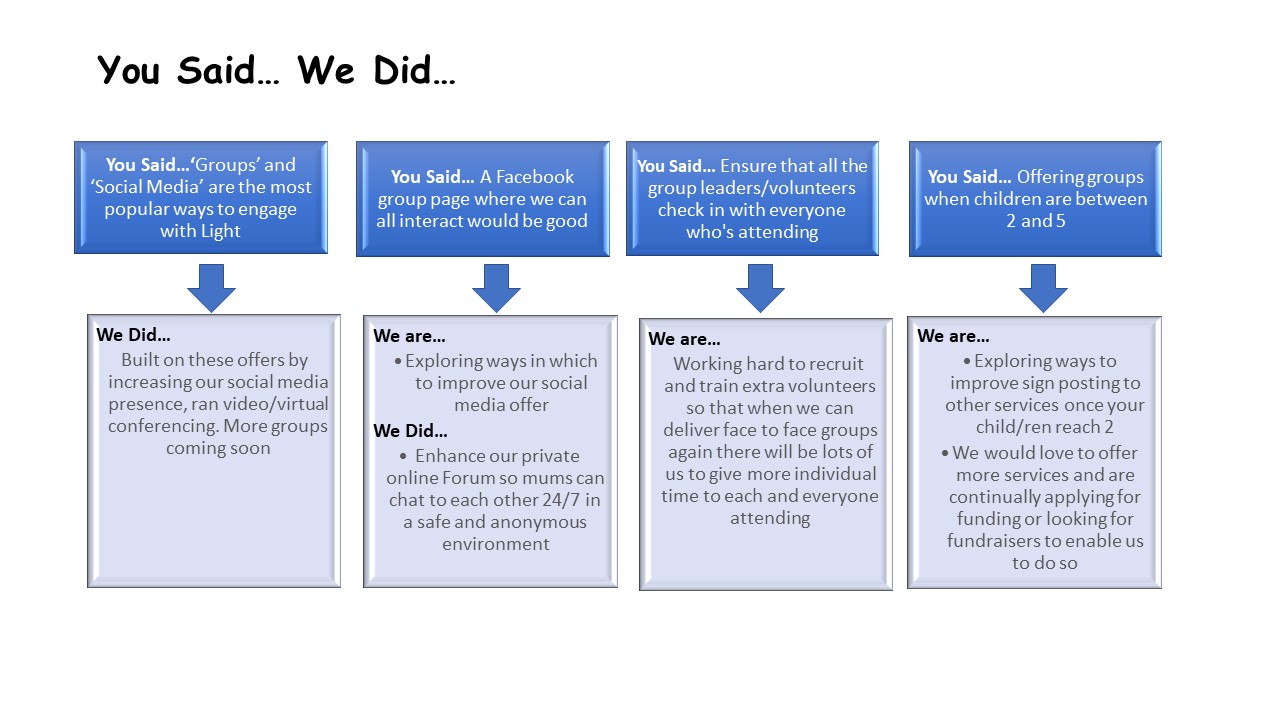 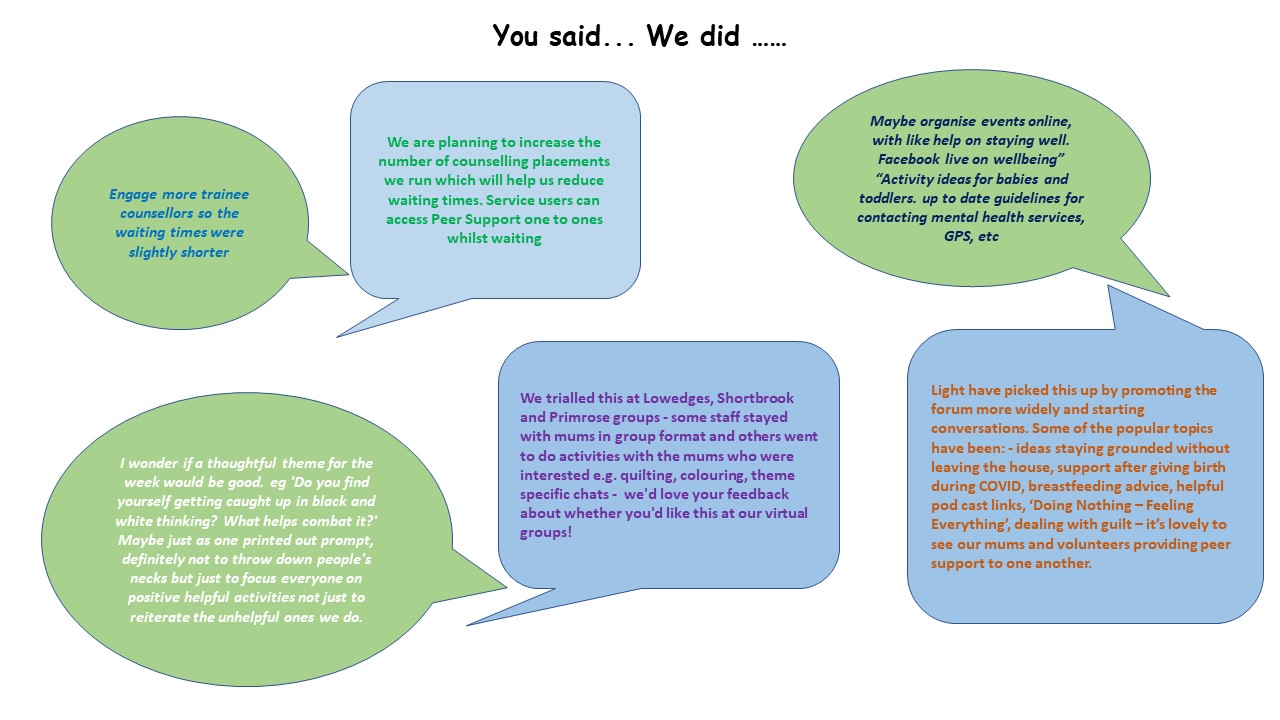 To register or to be included in the invite, please email us [email protected] or ask you 1-1 support worker.

All groups are confidential, non judgmental, safe and warm. They are the most popular and evidential way of peer support. Please ask if you would like more information. We know it can be daunting but we are here to support you and to help.

If you would like to join an informal, non judgmental, safe environment friendly chat with a small group of other pregnant ladies for some peer support, please email [email protected] and we will get back to you with an invitation.

We will be hosting group video chats every Wednesday afternoon 1-2pm by popular request.

To join this chat group please email [email protected] to let us know you are interested. We will then email you an invitation to join. We use microsoft teams. Any questions please ask.

Number are limited to 5 mums per group but we will do another group if the need is there. 🙂

We are still supporting one to one by text and email as well as the forum peer support too.

We use cookies to ensure that we give you the best experience on our website. If you continue to use this site we will assume that you are happy with it.Accept CookiesLearn more